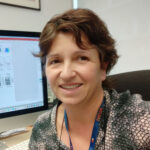 Anna Bigas holds a PhD in Cell Biology from the University of Barcelona. She has a long-standing interest in hematopoietic stem cells and leukemogenesis. Her work as a post-doctoral fellow (Fred Hutchinson Cancer Research Center, Seattle 1993-1997) was pioneering in identifying a role of Notch in the regulating hematopoietic differentiation, a highly influential contribution to the field of hematopoiesis. Since starting her independent research group in Barcelona, Spain (IRO/IDIBELL, 1998-2008); she has sought to decipher the molecular mechanisms that regulate stem cell commitment, maintenance, differentiation and oncogenic transformation, mainly focused in the hematopoietic system. Dr. Bigas has currently a double affiliation with IMIM (since 2009) and IJC (starting 2020) and she is currently the Scientific Director of CIBERONC, Deputy director of Preclinical Research in IJC and Coordinator for Cancer and Stem Cells research group in IMIM. In addition, her group has uncovered a role of Notch in regulating programmed cell death in erythroid lineages, and the contribution of Notch and Wnt to T-ALL and CTCL or intestinal development and cancer, Development. More recently, a collaboration with Dr. Lopez-Bigas (IRB) and Dr. Ribera (IJC) groups has contributed to the understanding of leukemic relapse in adult T-ALL. Amongst her honors are the Awards from Fundació Marató TV3, AECC (Spanish Cancer Association) and the Worldwide Cancer Research.