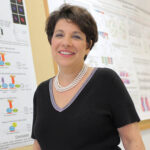 Dr. Abate-Shen began her independent career as an Assistant Professor at Rutgers Medical School in 1991, where she rose quickly through the ranks, becoming Professor, Chief of the Division of Research in the Department of Medicine, and co-leader of the Prostate Program for The Cancer Institute of New Jersey. In 2007, Dr. Abate-Shen was recruited to the faculty of Columbia University Vagelos College of Physicians and Surgeons as the Michael and Stella Chernow Professor of Urological Oncology, at the Herbert Irving Comprehensive Cancer Center (HICCC), with appointments in the Departments of Urology, Pathology & Cell Biology, Medicine, Systems Biology, and the Institute of Cancer Genetics. In 2008, she was appointed Associate Director at the HICCC, and served as its Interim Director in 2012 as well as in 2017-2018. In 2019, she was appointed as Chair of the Department of Pharmacology, and the Robert Sonneborn Professor of Pharmacology at Columbia University Vagelos College of Physicians and Surgeons. Dr. Abate-Shen is an internationally-recognized leader in genitourinary malignancies. Dr. Abate-Shen has been the recipient of numerous awards, including a Sinsheimer Scholar Award, an NSF Young Investigator Award, and an American Cancer Society Research Professorship, the first to be awarded at Columbia University Medical Center. She has served on the Board of Scientific Counselors of the National Cancer Institute, as well as on its Blue Ribbon Panel Working Group for the Cancer Moonshot Initiative. Dr. Abate-Shen has served in various leadership roles in the American Association for Cancer Research including a member of its Board of Directors.