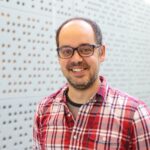 Dr. Eduard Porta-Pardo obtained his degree in Biotechnology from Universitat Autonoma de Barcelona in 2008 and his PhD in Biomedicine from Universitat de Barcelona in 2013. Between 2013 and 2017 he was a postdoctoral associated at SBP Medical Discovery Institute (La Jolla, USA) where he worked on how to use of protein structure data to identify cancer driver genes and drug biomarkers. Between 2016 and 2018 he co-led two analysis working groups from The Cancer Genome Atlas PanCanAtlas project, on cancer driver genes and oncogenic mechanisms, and contributed to a third on the immune landscape of cancer. Between 2018 and 2019 he was a La Caixa Junior Leader Fellow at the Barcelona Supercomputing Center (BSC). There he worked on how germline variants shape the immune response against tumors and on the use of polygenic scores to predict cancer risk. Since 2020 he leads the Cancer Immunogenomics laboratory at the Josep Carreras Leukemia Research Institute. The group uses computational approaches to understand how genetic variants, both germline and somatic, interact with the tumor microenvironment, particularly with immune cells.