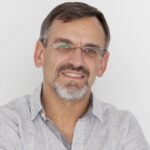 Paco Real was born in Barcelona in 1957 and obtained his MD (1980) and PhD (1986) from the Universitat Autònoma de Barcelona. He trained in Medical Oncology at the Memorial Sloan- Kettering Cancer Center in New York (USA), where he was appointed Research Associate in 1985 and Staff Physician for the Medical Oncology Division in 1986. His work focused on the development of monoclonal antibody-based strategies for the treatment of melanoma and epithelial cancers. Alongside J. Mendelsohn, he led the fi rst clinical trial with anti-EGFR monoclonal antibodies in humans. He joined the Institut Municipal d’Investigació Mèdica in Barcelona (1988) where he was Coordinator of the Cell and Molecular Biology Unit until 2007. In 1998 he joined the staff of Universitat Pompeu Fabra (UPF), Barcelona, where he has been Professor of Cell Biology since 2004. He joined the CNIO in September 2007 as Senior Group Leader and currently chairs the CNIO Scientific Committee. Paco has made important contributions in the cell/molecular biology of pancreatic and bladder cancer and, most recently, the genetic analysis of benign epidermal tumours. He has served on the Advisory Editorial Boards of Biochemical Journal (1994-2008) and the Council of the European Pancreatic Club (2005-2008). He has served as President of the Spanish Association for Cancer Research (ASEICA) (2002-2004) and received several awards including the Charles Mérieux Chair at the Ecole Normale Supérieure in Lyon, France (1997).