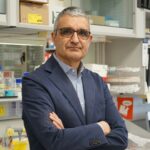 Dr. Xosé R. Bustelo is currently Research Professor at the Consejo Superior de Investigaciones Científicas (CSIC). He also holds the position of Principal Investigator at the Center for Biomedical Cancer Research (CIBERONC), a multicentre initiative sponsored by the Spanish government aimed at promoting cooperative work in basic and clinical cancer research. Dr. Bustelo’s scientific training includes his doctorate in Biology from the University of Santiago de Compostela (1990) and a postdoctoral period at the Bristol–Myers Squibb Pharmaceutical Research Institute (Princeton, NJ, USA; years 1990-1993). Later he worked as a «Staff Scientist» at the Bristol-Myers Squibb Pharmaceutical Research Institute (Princeton, NJ, USA; years 1993-1996), as an «Assistant Professor» in the Department of Pathology of the State University of New York at Stony Brook (Stony Brook, NY, USA; years 1996–2000) and, later, as Senior Scientist (1999–2004) and Scientific Researcher (2004–2005) of the CSIC at the Cancer Research Center (CIC) of Salamanca. Dr. Bustelo’s work has traditionally focused on understanding the signal transduction mechanisms that contribute to both the development of cancer and other high-incidence diseases. His work has been recognized by a number of both Spanish and international scientific awards. In addition to the foregoing scientific activity, Dr. Bustelo is the Vice-Director of the CIC of Salamanca, the Director of the CIC Genomics and Proteomics Unit, a member of the CIBERONC Executive Committee, the coordinator of the CIBERONC Mechanisms of Tumor Progression Program. He is also an active member of many advisory scientific committees and editorial boards. Finally, he has been the President-Elect (2017-2018), President (2018-2020) and President-Elect (2021-present) of the Spanish Association for Cancer Research.